The Blackwater Project will comprise the construction, operation, and closure of an open pit gold and silver mine and ore processing facilities commencing with a nominal milling rate of 15,000 t/d (5.5 Mtpa).  The ore processing facilities will be expanded to achieve 33,000 tpd (12 Mt/y) starting in year 6 with a final expansion to achieve 55,000 t/d (20 Mt/y) starting in year 11 of operation.  A combined gravity circuit and whole ore leaching (WOL) will be used for recovering gold and silver.

The proposed mine plan involves mining 334 Mt of ore, 584 Mt of waste rock and 83 Mt of overburden.  The material will be sourced via conventional open pit mining methods, initially targeting high-grade, near-surface ore for processing, with lower-grade material being stockpiled for processing at the end of the mine life.

Most of the waste material sourced from the pit will be used for construction of the tailings storage facility (“TSF”) or placed in the TSF itself.  Overburden and non potentially acid generating waste rock not required for construction will be placed in stockpiles adjacent to the open pit.  Potentially acid generating waste rock, along with tailings, will be deposited into the TSF located to the north/northwest of the open pit.

At closure, all buildings will be removed, disturbed lands rehabilitated, and the property returned to otherwise functional use according to future approved reclamation plans and accepted practices at the time of closure.

In addition to the site infrastructure, it is assumed that a 134 km, 230 kV transmission line will be constructed from the BC Hydro Glenannan substation near Endako, B.C. to the site to supply power to the Project.

Mining will be based on conventional open pit methods (drill-blast-load-haul) suited for the Project location and local site requirements.  Open pit operations are anticipated to run for 18 years, excluding 15–18 months of pre-production mining.  Following mining operations, stockpiled low-grade material will be processed for an additional five years, resulting in a total life-of-mine (“LOM”) of 23 years.  The open pit will be developed with a series of pushbacks.  The first stage will target suitable waste rock for construction whilst exposing near-surface, high-grade material.  The second phase will target higher-grade, lower-strip-ratio ore providing mill feed over the initial years of the Project.  The remaining stages expand the pit to the north targeting progressively deeper ore. LOM activities are summarized in Appendix A.

The process flowsheet has been designed based on historical test work and more recent test work carried out in 2019 for New Gold.

The most recent metallurgical program, completed in 2019, was carried out with the primary objective of confirming and optimizing the flowsheet and design criteria using a combination of new test work, results from the historical and previous test work programs, and trade-off studies completed since the 2014 Feasibility Study.  Drill core from site was sent to Base Metallurgical Laboratories Ltd. (BaseMet) in Kamloops, BC for test work that included core splitting, sample preparation, interval assaying, mineralogy, gravity concentration, cyanide leach and cyanide destruction.

The test program included three larger composites for optimization test work and 48  samples covering the deposit to establish the variability of the ore to the chosen flow sheet.

The mineralogy indicated that the sulphur content is mainly associated with pyrite, pyrrhotite and sphalerite.  The comminution test work included semi-autogenous grind (“SAG”) mill comminution (“SMC”) on the new drill core, Bond rod mill work index (“RWi”), Bond ball mill work index (“BWi”) and abrasion index (“Ai”) tests.  The results indicate the material is hard with results ranging from 11.8 to 24.6 kWh/t and the 75th percentile of the samples tested was 21.1 kWh/t for the variability samples.  A correlation between gold extraction and head grade was not observed.  The variability composite results averaged 93.7% total gold extraction with gravity gold recovery of 34.2%.

Based on the test results, a gold doré can be produced with a primary grind size of 80% passing (“P80”) 150 μm followed by gravity concentration, 2 hour pre-oxidation, a 48 hour cyanide leach at an initial cyanide concentration of 500 ppm and a pH of 10.5, carbon-in-pulp (“CIP”) adsorption, desorption and refining process.  The weighted average of the year composites, based on the mine plan, is estimated to achieve an overall average gold recovery in the range of 93% to 94%.

The initial design daily throughput is 15,000 tonnes per day, with an availability of 75% used in designing the crushing circuit and 93% for the design of the rest of the plant.

The process will consist of: 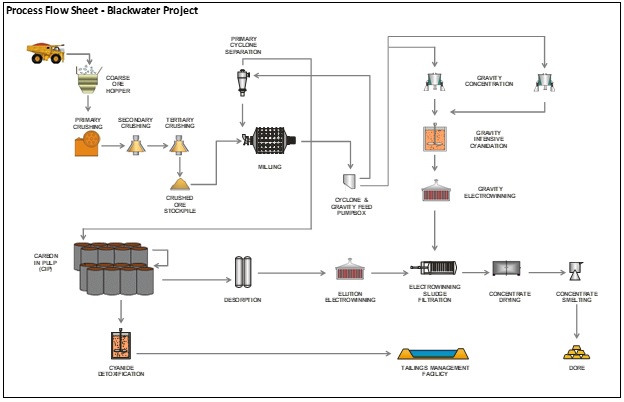 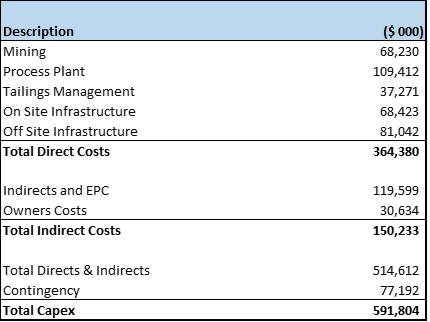 The Study economics consider two private royalties at 1.0% and 1.5% over parts of the Mineral Reserve.  Estimated payments to Indigenous nations are also included in the economic cash flow model for the Project.

In the economic results for the Project, the Company presents a base case economic analysis, being unlevered, plus an alternate levered case. The levered case is based on the following assumptions: